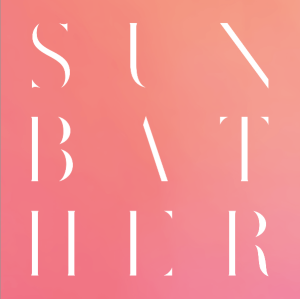 “Sunbather,” a seven track, full-length record, is largely unclassifiable. Deafheaven have been both widely acclaimed in the critic world, and occasionally scorned in the metal world for their blending of genres. The band is currently being labeled as “black metal,” but there is a distinct shoegaze element to their music as well. To put it simply, Deafheaven sounds like a couple guys who wanted to start a metal band but listened almost exclusively to My Bloody Valentine. And there is nothing wrong with that.

This is a brutally heavy record. A majority of the tracks stretch close to or well over ten minutes, allowing the band ample time to stretch their wings and experiment. The songs build up upon themselves, twisting and growing, not unlike God Speed! You Black Emperor. In fact, if it wasn’t for the traditionally growly black metal vocals, Deafheaven would probably be pegged as a very heavy alternative/shoegaze band. But the vocals, as often inaudible as they are, add to the intensity, leaving Deafheaven declaring themselves as a metal band.

“Sunbather” is truly one of the most original and interesting albums I have heard in a long time. I do not have much of an affinity for most subgenres of metal, yet I could do nothing but gasp and let myself be wholly entranced by the band’s originality. Bands are finding it tougher and tougher to make volume equate intensity, but Deafheaven does it ceaselessly. Fans of heavier alternative bands might be able to transition over genres and appreciate what this band is doing. Nearly every track on this album, from the lengthy, abrasively loud songs, to the shorter and quieter interlude pieces, borders on perfection. Only the album’s closer, “The Pecan Tree,” is disappointing, solely because it ends anti-climatically, and this album needs a more proper climax. Give this album a few listens; it might just be one of the most original of the year.

If you like this, try: “Allejuah! Don’t Bend! Ascend!” – Godspeed You! Black Emperor.