Surviving Nirvana members Dave Grohl, Krist Novoselic and Pat Smear recently played at the Rock & Roll Hall of Fame induction with some rotating singers – Joan Jett, St. Vincent, Kim Gordon and, unpredictably, Lorde (and J. Mascis in an afterparty). It was only the third time they had performed together after Kurt Cobain’s death, the first two times being with Sir Paul McCartney. In that time, they only recorded one new song (with Sir Paul). The men have been very careful not to alter the band’s legacy in any way, and the only performances have honored both their own music and Cobain’s life.

Pixies, sadly, have gone the way of almost every other early 90′s band – Alice in Chains, Sublime, Smashing Pumpkins, Bush, Hole, Blind Melon – in reforming with a different lineup in a move that seems just shamelessly capitalistic. (Exceptions, of course – Soundgarden kept the same lineup, Pearl Jam and Radiohead are still going strong). Their first album in 23 years, “Indie Cindy” captures almost none of their perverse magic of the past. While it isn’t a horrendous album, it’s wildly, wildly inconsistent and is usually content being just a footnote to the band’s career rather than trying to expand on it.

There’s a lot to pick apart on the album. The most obvious, and most painful thing to note is that none of these 12 songs are necessarily new. Pixies released three EP’s, four songs each, from the end of last year to just last month. “Indie Cindy” is simply those 12 songs put together and reordered. At the tail end of an era where bands are reforming in the name of capitalism, this seems like the biggest moneygrab of them all.

For the most part, the music itself isn’t bad. It just isn’t Pixies. Pixies made a name for themselves (and influenced a whole decade of music that followed them) by creating wholly unpredictable music that was both melodic and noisy, with lyrics often about violence and mutilation. Yet there was a radio-friendly quality to the music that bridged the gap between radio alternative and underground bands. Here, most of the songs are closer to straight radio rock, ranging anywhere from decent to totally forgettable.

The album’s best songs are the ones were there are many things going on. “Bagboy” is a prime example – it’s partially spoken word, with heavy guitar rhythms and a few different percussion things going on. And “Magdalena 318,” which has a more industrial and grungier feel to it, easily the album’s best song. Too many of the songs are too straightforward, lacking energy and any real creativity. “Greens and Blues,” “Silver Snails” and “Snakes,” as just three examples, are three melodic and rounded alternative songs, but ones that are instantly forgettable. The good tracks on this album are diamonds in the rough, and there’s a lot of sifting to go through.

Besides the music, Black Francis’ vocals are inconsistent, too. There’s none of the screaming and unpredictability, but he hits some classic Pixies vocals – at points. On “Magdalena 318″ and “Blue Eyed Hexe,” his voice sounds just like it used to. Yet elsewhere his vocals are pretty average, contributing to the very average quality of the music. And on “Andro Queen,” his vocals are downright bad, with the song sounding like some cut track from a trippy 60′s band.

From the time that the Pixies first reunited to the time they actually put out “Indie Cindy,” two things happened – they lost Kim Deal, the equally creative force behind their earlier music (and have yet to find a permanent replacement), and they surpassed the amount of time in which they were a band in their first run. That should be indicative of the album – the time it took to put out one album in 2014 is longer than the time it took them to put out four studio albums and an EP in the early 90′s. “Indie Cindy” is passable as an alternative album, but it never has any idea what it wants to be. Occasionally, the band tries to grasp at their amazing legacy. But usually, they’re comfortable with sorely unremarkable alternative/”butt-rock” songs, and there’s simply no reason for this album to exist. It takes their legacy down a notch; adds an asterisk onto the ends of some legendary albums. “Indie Cindy,” to put it honestly, will please the local alternative radio DJ’s, but not the station’s listeners.

If you like this, try: I don’t exactly know what to recommend here, but if you’re into this album then you’re probably really into 90’s music rebirthed so I’d recommend Soundgarden’s surprisingly passable 2012 album “King Animal” or Smashing Pumpkins’ great 2007 album “Zeitgeist.”

“Watch the Throne,” the rap experiment from Jay-Z and Kanye West in 2011 must have left a mark on both performers. Both Jay and Kanye released albums this summer that showed growth and change as performers. But where Kanye’s “Yeezus” was a tormented work of introspective loyalty and political consciousness, “Magna Carta Holy Grail” is just an album of basic beats and repetitive lyrics about Jay-Z’s wealth. Jay-Z is said to be worth about $500 million alone, plus the wealth of his equally-famous wife, Beyonce. His ‘change’ is a further disconnect from his own fans, where his constant rapping about European vacation destinations sounds more like bragging to an audience than typical lyrical boasts. Rap & hip-hop is typically a young man’s game, and with Jay’s 43 years bringing him twelve platinum albums and partial ownerships in a nightclub chain and a professional basketball team, he is officially too far into the entrepreneurial world to sound fresh and real in the hip-hop world.

The album is not all bad. “Part II (On the Run)” features typically amazing work from Beyonce, and “BBC” is a fun song because of it’s guest spots: Beyonce, Justin Timberlake, Nas, Pharrell, and Swizz Beatz. “Jay Z Blue” is a brutally honest song about his daughter, and how he fears comparisons to his own father who was never around but for very different reasons. And “Oceans” features a well-placed guest spot from Frank Ocean, on a song about the film “Ocean’s 11″ being a metaphor for Jay’s accumulation of wealth.

Some tracks are just bad. The opener “Holy Grail” which also features Timberlake, is a bombastic call for receiving a legendary status, as Jay and JT channel Kurt Cobain and harmonize on an amended version of the chorus to “Smells Like Teen Spirit.” Not only does it sound bad, and not only does Jay already have the legendary status that he is attempting to claim to himself, but it is that kind of fame that led Cobain to suicide in the first place. The song is a dramatic misreading of Nirvana. “Somewhere in America” is the album’s worst track. Hova raps about how he’s good at math because he can count his money and than randomly mentions Miley Cyrus twerking. The song sounds like Jay freestyling a joke song in the studio and adding serious beats to it to make it a real track.

Other than the feeble Nirvana reference, there are some delightfully surprising references and soundclips on the album. Sinatra and Johnny Cash get reworkings that work much better than Cobain’s. M.I.A. and R.E.M. also get references. The most surprising, and haunting, is a soundclip from “Mommie Dearest” that leads in to “Jay Z Blue.” Where the album has some interesting references and clips, it is lacking in guest spots. A majority of the songs are just Jay-Z, and with the repetitive lyrics, it starts to get pretty old pretty quickly. Overall, “Magna Carta Holy Grail” is a very safe album that takes no chances whatsoever and sounds disconnected and pointless because of it. Hova is just too far out of reality to relate to any listener besides those that already appear on the money-drenched album.

One final note: the album was famously released to Samsung Galaxy users a week ahead of time. This irked me in two ways. As a Galaxy user who downloaded the album, I had to sign away the rights to all of my personal privacy in order to get the album. I’m personally expecting a bodyguard to show up at my door soon after I publish this and question why I didn’t like the album. With the NSA leaks and Hova’s past songs against privacy concerns, this didn’t even make sense. Also, I didn’t even get the album until Saturday, something like four days after I was supposed to, which almost negated the point entirely. Even then, the app died twice throughout playing the album. The album is already platinum and Jay already has millions because of it, but at what cost to his fans?

In conclusion, here’s a screenshot from the commercial that advertised the album that accurately sums up the problems: 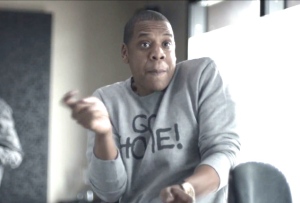 The dream of the 90’s is alive in Baltimore. Roomrunner gleefully throw ode to some of the early 90’s grunge and noise rock bands. Nirvana is idolized through fast rhythms that let a punk influence bleed heavily through. Pavement is redrawn through heavy distortion that adds to the melodies and through the rough transitions between songs. Roomrunner never tries to be conventional. The opening track, “Bait Car” is an assault on time signatures that are sometimes impossible to decipher. “Wotjek” sounds like more of a poppy side to the band, until the chorus, featuring rhythms of pure feedback that are different on each passby. The finale, “Snac Error,” ends with a waving drone of guitar that takes up a good chunk of the track.

“Ideal Cities” is over in about a half hour, and it is one of the rare times where the short length of a punk album does not feel entirely fulfilling. The album wasn’t one idea stretched into a certain number of tracks, but a bunch of little experimentations that left me wanting more. This is hardly a criticism, as the band made an interesting record that sounds fresh but resembles the pre-grunge bands of yesteryear. It is melodic and noisy, all while maintaining a sense of fun. Pavement and the Pixies would be proud.

If you like this, try: “Living Dummy” by Pangea (2o12). More of a conventional (surf-)punk record, but there is a similarity between bands, I cannot emphasize enough my love for “Living Dummy”