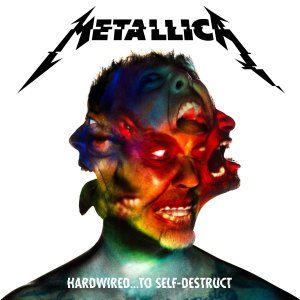 Do you ever just stop and marvel at Metallica? I sure as hell do. They not only helped bring metal into the mainstream, they’re the faces of the genre. Metallica are considered one of the “big 4” thrash-metal bands of the 80’s that helped popularize metal as a whole. But, unlike Slayer, Megadeth and Anthrax, they’ve stuck. All four bands are still active, and have been since the early 80’s. But the other three, in their own distinctive styles, have stuck to their bases in order to not lose credibility. Metallica have done anything but that. They’ve always taken risks, knowing full well they could jettison their core fans. Their first four albums thrust thrash metal into the spotlight, but their 1991 self-titled album was a divisive affair of radio-friendly hard rock that proves to still be radio-friendly 25 years later. It was significantly lighter than previous work, putting focus much more on production and and the lumbering elements of the songs; it is beloved by music fans, and hated by many thrash metal fans. (This reviewer personally finds it very boring, but sees its value.) 2003’s disaster “St. Anger” ditched guitar solos for a garage-rock sound (and the crappiest production in the land), and failed on incomprehensible levels. And 2008’s “Death Magnetic” brought the group back around to their thrash roots.

Their highs and lows are higher and lower than most bands can claim, so in the rare days when Metallica actually releases new music now, there’s the see-saw teetering worry if it will actually be any good or not. Well much like their last album, “Death Magnetic,” there isn’t much reason to worry, but not much excitement either. All of the elements are present: hard-hitting riffs, James Hetfield’s sometimes-dopey-sometimes-effective lyrics, Kirk Hammett’s bulging guitar solos, Rob Trujillo’s thundering bass and Lars Ulrich’s no-frills, rapid drumming. The production is, thankfully, excellent – the first time since ’91, an issue that most big bands never face. It’s just that the music itself is lackluster. Despite the band’s claims, it’s easy to think they’re losing steam.

This album was billed as a double-album. There doesn’t seem to be any real reason why, exactly, other than to be different and maybe provide a fabricated moment of relief. It does indeed clock in at 77 minutes – but their previous album clocks in at 74. Splitting the album into two doses of 6 songs does seem to send a message though – a message that fans, and the band, might not want to be pummeled with sound anymore. These dudes are aging, whether they like it or not, and an inconsistent energy throughout shows.

The album’s first half is absolutely stronger than the back half. The album opens with what is actually their second shortest song – “Hardwired,” an absolute bruiser with the energy of anything from “Master of Puppets.” The lyrics are among some of the dopiest that James Hetfield has ever written – but spin the song a few times and you won’t really care anymore. “Atlas, Rise!” follows, with significantly better lyrics (best of the album), and the second of two already punching Kirk Hammett solos. Follow-up “Now That We’re Dead” suffers from Metallica’s biggest problem – the long intro. They made needlessly long intros work in the 80’s, but ever since then they’ve made long intros by just…playing the same thing over and over again. And that’s how this track starts. The track itself is enough of a puncher, but loses faith in taking too long to get to a point. Second single “Moth Into Flame” is probably the best work on the album, a truly ripping song that showcases everything the band does best. Hopefully, it will go down in the Metallica canon as an all-time great. Watch them rip apart Jimmy Fallon’s set to see how great the song is. The first disc closes out with “Dream No More,” a song that would seem fairly bland if not for Hetfield’s excellent vocals, and “Halo On Fire,” the album’s longest song, and a very effective pseudo-ballad that harkens back to their best tracks from the self-titled album.

The second disc falters, though, with nearly every track sounding like one that just made the cut. “Confusion” isn’t a particular winner, with dumb, overused lyrics complementing some less-than-engaging music. “ManUNkind,” bad title and all, is just boring through and through. “Here Comes Revenge” overstays its welcome, but has more of an energy to it that is lacking in the previous two songs. It’s a fun track, one of the album’s many that might sound better live. In a very similar vain is “Am I Savage?,” a bruiser that ultimately isn’t interesting enough to make the first disc, but still plenty enjoyable. Penultimate track “Murder One” is aided by being the only track on Disc 2 that’s under 6 minutes; it feels comparatively brisk, and the beat, although not inherently interesting, feels stronger because of it. Finally, though, comes the closer, “Spit Out the Bone.” Oh man. The song reinterpolates the opening track, “Hardwired,” taking a song that’s already very quick and playing it even faster. Much more than any other song on the album, “Spit Out the Bone” is pure thrash. It ultimately goes on far longer than necessary, but it’s the first time in many, many years that Metallica have proven they can cause whiplash in listeners.

Metallica don’t have anything to prove in 2016. They haven’t had anything to prove in a long, long time. They’re the only one of the “big 4” that’s been inducted into the Rock & Roll Hall of Fame, and it’ll likely stay that way. They’ve outsold the other three, combined. They’re still one of the best live bands, ever, and yeah – they can make every track on this monster sound great. So when you listen to this album, keep in mind everything Metallica has been able to accomplish, everything that has led them to be able to make an album like this so far into their careers. No, it’s not perfect, and it’s not even great. But damn, when these dudes want to, they still go hard, and they’re still great guys. This won’t win over any new fans, and it’s by no means a classic. In fact, they should have cut multiple songs and/or twenty minutes of runtime. No Metallica album needs to be as long as it is. But, by default, it’s the best Metallica album in a long, long time. It’s a mixed album, for sure, but one that will likely improve with the band’s incredible live show. And for now, best to just sit back and strap in.