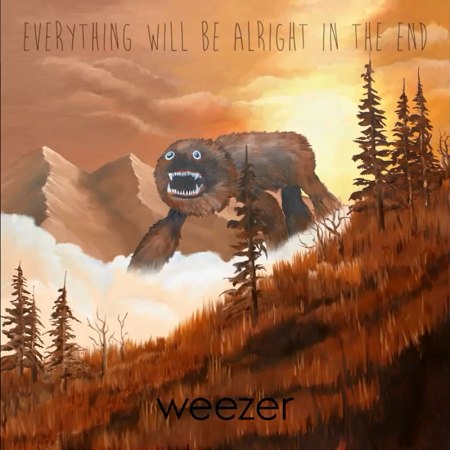 Baby steps, people. Baby steps. It’s been a longtime since we’ve seen a Weezer we can trust, but we’re getting closer.

It’s no secret that Weezer fans, and fans of basic alternative radio, have suffered over the past decade. Since the excruciating “Make Believe” in 2005, Weezer has released a string of five largely terible albums. And most of them roped us in with great singles – 2005’s “Perfect Situation,” 2008’s “Pork and Beans,” 2009’s “If You’re Wondering If I Want You, I Want You To,” 2010’s “Memories.” But after a four year break (no, not some more undergrad studies), Weezer are back with an album that comes closer to revisiting their roots than they’ve seen in 12 years.

You may have heard leadoff single “Back to the Shack.” It’s honestly a pretty terrible song. Something about the weird hip-hop influence over the fuzz guitar doesn’t work, like something is just off. But the sentiment is there – an apology to fans and bandmates, from Rivers Cuomo, for years of music that didn’t sound like “My Name is Jonas” or “El Scorcho.” Indeed, Weezer go back to the basics on this album. It’s the closest thing to 90’s fuzz-rock we’ve gotten since 2002’s underappreciated “Maladroit.” And while it’s inconsistent and largely less than exciting, it’s still a nice refresh on a legacy that had become more asterisks than not.

The album deals with relationships – Cuomo’s relationships with others, women, and his father. They might be tried topics, but not for a band that’s trying to reclaim a lost sound. The last of those – Cuomo’s relationship with his father – comes through the strongest. The album’s last four tracks deal with it. “Foolish Father” is direct, but the last three songs – a trilogy – are not. “I. The Waste Land,” “II. Anonymous,” and “III. Return to Ithaka” close out the album on a big note, a booming finale of tracks that’s reminiscent of bands bigger than Weezer. Parts I and III are instrumental, but it doesn’t matter, because they hit a sound they’ve never really hit before.

The 90’s garage-nerd fuzz comes back, finally, though it isn’t as strong as it used to be. This album is about on par with the Green Album – the kind of Weezer we like to hear, even if it isn’t their best work. Most of the songs aren’t that memorable, but it still makes for a good listen. Cars frontman and early Weezer producer Ric Ocasek seems to have roped the band back in, too, with his production sounding similar to the band in their heyday. It seems like we can finally say, “gone are the days of mediocre, scattershot Weezer.” “Everything Will Be Alright in the End” doesn’t have the standout songs that “Ratitude” or “the Red Album” have, but it instead offers more than just two good songs. Nearly every track on “Everything” is 90’s era garage-rock, and the only ones that aren’t are the mid-album slow jams. “Everything” isn’t going to go down among “the Blue Album” and “Pinkerton,” but it’s a serious step in the right direction, and it’s the album that we, or at least I, never thought I would hear Weezer put out anymore.