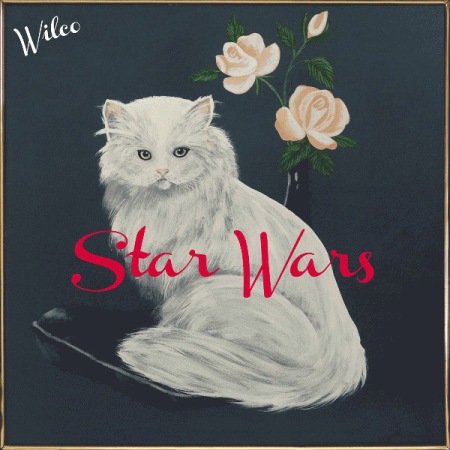 Key Tracks: “You Satellite” “Where Do I Belong”

Wilco are at an important point in their career. Like many artists before them – namely David Bowie, who they channel heavily here on their ninth album – they’re at a point where they’re growing restless again. Wilco established their original sound, as an alt-country band. And then, out of nowhere came “Yankee Hotel Foxtrot” and “A Ghost is Born,” their creative reawakening albums (although in most band trajectories, this period comes from creative woes, not accidental painkiller addictions). After Jeff Tweedy recovered, the band’s sound settled into a more mature, introspective look with the still-excellent “Sky Blue Sky.” And the two albums since then have seen the band embrace their catalog as a whole, both poking fun and honoring their creativity of the past.

But, like Bowie did on “The Next Day,” they’re again growing restless with maturity. “Star Wars” is unlike any other Wilco album, in many ways. For on thing, it’s called “Star Wars.” Also, the cover has an adorable cat on it. It looks more like the cover for a Dusty Springfield record, not a Wilco one. And the songs are shortened, tightened and energized. There’s certainly other Wilco songs that would feel comfortable on this album – “Shot in the Arm,” “Wilco (the Song)” come to mind. But the band has created songs that don’t give themselves room to breathe. At 2:30, “Pickled Ginger” sounds just like a cut Deep Purple song with it’s fuzzed-out, grinding guitar line. Although “Star Wars” is distinctively Wilco, the songs here have traveled a long way from “Impossible Germany.” And it’s not a criticism – it’s a familiar sound, in an unfamiliar package. At 33:47, it’s the band’s shortest album by nearly ten minutes (ten minutes being two-thirds the length of their longest song). And as a band that’s stayed reliant to the album format, their decision to drop this release suddenly and for free online is growth as well.

Although the band has been playfully looking back at their earlier works in recent years, “Star Wars” marks the first time in years that they’ve actually incorporated any elements with an avant garde feel. They come mainly in the opener, “EKG,” a 1:15 chippy, dissonant intro that doesn’t serve as a standalong song, instead as a declaration of what’s to come.

Also, Jeff Tweedy as a frontman and songwriter seems to be less of a focus on this album. Something noticeable about one the album’s best songs, “You Satellite,” is that the volume of his vocals is closer to the rest of the instruments, instead of being at the forefront. And eventually, he gives way to the music entirely. Tweedy’s lyrics on this album aren’t his best (they’re a lot vaguer than past Wilco albums), but the focus is on the music and the vibe anyways. The longer they’ve been around, and especially since they’ve developed a more steady line-up, Wilco has seemed more like a full band and less like a collective.

Wilco haven’t released a mediocre album since 1999’s “Summerteeth,” but it’s been a long time since they’ve released a great one, too, and that’s just what “Star Wars” is. This is their best album since “Sky Blue Sky” in 2007 and, if you like just fun and lively Wilco, then before that. There are moments of beauty and grace on “Star Wars,” especially in affectionate closer “Magnetized.” But more often than not, those moments are often followed up by a sudden drum line, feedback or guitar melting. Just as you would expect from a band growing restless yet again.

If you like this, try: This one’s probably obvious since I mentioned it, but it’s stylistically and tonally resembling of Bowie’s “The Next Day,” if not actually all that similar.