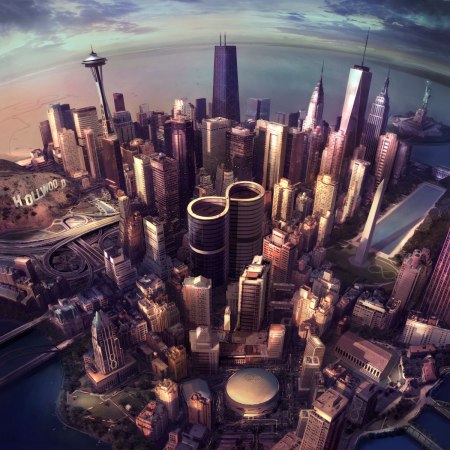 Key Tracks: “Something From Nothing” “What Did I Do?/God As My Witness”

Ever visit a coffeeshop or restaurant enough that the staff knows your order? You walk in and they’re already making it? That’s what the Foo Fighters are like. Their albums are entirely softball pitches, the musical equivalent of treading water. 2007’s “Long Road to Ruin” sounds just like 1995’s “This is a Call” which sounds just like 2002’s “All My Life.” They gleefully play music that’s expected. And there’s nothing wrong with that, other than new albums being predictable almost to the song. It’s to the point where I never even bothered listening to 2011’s “Wasting Light.” But this album is different – it’s a proto-concept album. Eight tracks, each recorded in a different city, “in the vein” of that city’s music scene. It’s a great concept – but they don’t pull it off all that well. It varies heavily by track. They tried to keep their signature sound, but it’s similar to someone hugging you and letting go just enough so you can breathe again.

The cities they cover are, in order: Chicago, DC, Nashville, Austin, Los Angeles, New Orleans, Seattle, and New York. And each track offers a guest musician from that city, although like the songs themselves, both their involvement and the marquee quality of their names vary wildly. Since “Sonic Highways” is so inconsistent, it’s best just to discuss the album track by track. Ready? This might take a while. Let’s go:

1) “Something From Nothing” – Chicago. It’s fair to say that, with exception maybe to LA, Chicago has the weakest music scene of the cities done. This is the leadoff single, and arguably one of the album’s better songs, though hurt unintentionally by a lack of uniform scene in the city. Contributing baritone-guitarist Rick Nielsen (of Cheap Trick and 5-neck guitar fame) adds a weird and jarring dimension to the song with a murky rhythm that sinks the song’s pitch. The song builds, slowly, to a nice climax too. The band take their time more on this album – five of the eight songs are over five minutes. Sometimes it doesn’t work, but this is a pretty strong Foo Fighters song.

2) “The Feast and the Famine” – DC. There’s no reason why this one shouldn’t work, but it’s a mixed bag. Every Foo Fighter grew up playing in punk bands – most notable being Pat Smear founding Germs. So the band tries to rope in the 80’s DC hardcore scene, even so much as bringing in members of Bad Brains on vocals. But what results isn’t a punk song, just a fast radio rock song, intense, but no more so than, say, “Low” or “I’ll Stick Around.”

3) “Congregation” – Nashville. I’m just going to come out and say that this track is boring. It lost my attention as it drags past five minutes, far too long in this case. It’s also impossible to tell what Nashville’s music scene is from it. The inclusion of Zac Brown should be an indicator, but it’s just an average, dull rock song. There’s no Tennessee in it at all.

4) “What Did I Do? / God as My Witness” – Austin. This, by contrast, is by far the most interesting and enjoyable song. It’s titled twice, and there is a stoppage in the middle – but it’s distinctly one song. It’s one of the Foo’s more inventive tracks, and it doesn’t feel long even though it’s 32 seconds more than the long-feeling “Congregation.” Blues guitar virtuoso Gary Clark, Jr., is brought in, and although his inspiration isn’t felt until the solo-heavy climax, it’s worthwhile. He’s one of the better used guests, and the it’s one of the more city-inspired tracks. It has just the faintest blues and country elements, both musically and lyrically.

5) “Outside” – Los Angeles. This is an energetic track, though pretty average. It’s helped by a great solo from Joe Walsh. There’s very little to say about, other than it gives me an excuse to listen to a Joe Walsh solo without having to suffer through an Eagles song.

6) “In the Clear” – New Orleans. Foo Fighters bring in Preservation Hall Jazz Band, the legendary, decades-running collective, and completely waste them by burying them under their own guitars. Foos could’ve made a cool, jazzy track, but it’s got no Jazz Band and no New Orleans, just another Foo Fighters song with some occasional, distant horns.

7) “Subterranean” – Seattle. This is another city that they really shouldn’t have messed up given, you know, Dave Grohl being in Nirvana and all. But it doesn’t represent Seattle’s music scene very well. It’s a boring, midtempo song, completely devoid of the insanity that blessed Nirvana, early Pearl Jam and Alice in Chains. That might be the work of sadsack crybaby guest musician Ben Gibbard, of Death Cab for Cutie and Postal Service fame. His music is dryer and more medium paced, much like this song. Then again, given that he is entirely indiscernible on the song, it might not be.

8) “I Am a River” – New York. Taken just as a closing song, this one’s pretty strong. It creeps along, building ever so slowly into a proper album finale climax. Put it on a different album, it would work great. I just didn’t get what faction of New York it was representing. New York’s “music scene” is largely punk-based, but there’s indie and, well, Frank Sinatra thrown in too. The only NY band I could come up with that this resembled was Interpol, and while I love Interpol, I don’t know that they’re quite the caliber band that the Foo Fighters are going to play off of. Also, this track has the most disappointing guest in Tony Visconti. No disrespect to Visconti – his work with David Bowie throughout decades is tremendous. It’s just that when you’re combing the biggest city in the country, the one that is the music home of Karen O, Patti Smith, Julian Casablancas, BB King, and the surviving Beastie Boys, Tony Visconti seems like an oddly subtle choice. Visconti, like every guest except Bad Brains and Preservation Hall Jazz Band, contributes guitar.

This is a weird album. Foo Fighters, or at least Grohl, seem deeply wrapped up in this concept of music scenes in cities. We’re not really getting let in on that concept as much as the band thinks. We can’t celebrate the music of Seattle or DC when it’s just another Foo Fighters song that happens to have a guest star you can hardly decipher. So my recommendation, if you’re going to listen to this album – don’t play into the concept. Just listen to it as a straight Foo Fighters album. It still won’t be great – the tracks will go on too long and it won’t quite have the flow that its predecessors do. But it’s probably more enjoyable when you don’t factor in the effort of an extensive and expensive recording process, with city influence. Just don’t think about it. Foo Fighters have never been a challenging band, there’s no reason for them to start now.