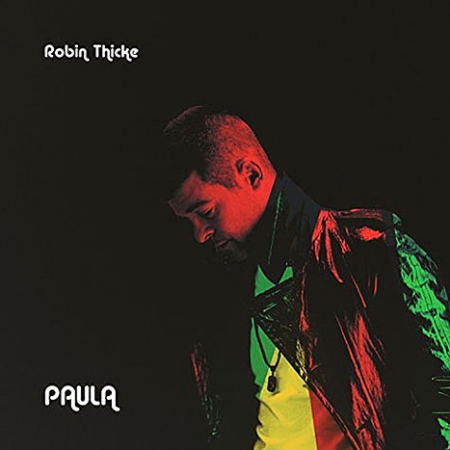 Let’s get this out of the way. This isn’t about the music. I don’t yet know if I’m referring to the album, or this review. But it’s a rare occasion when I can review an album where the music plays such an afterthought to the context behind it. Because this is barely an album. It has songs, sure, songs that have choruses and rhythms. But it’s all a thin veil for an attempt at a passionate, public apology. Occasionally, it works. Often, it doesn’t. Thicke dives too deeply into their relationship, even when he’s criticizing himself, giving us information we really didn’t need to know.

So let’s talk about the music a bit. The music does take a backseat, but when he’s prepping a quote-unquote ‘concept’ album like this, it’s not really the focus. Still, it’s all simple R&B, never elevating itself beyond some basic beats and unchanging soul rhythms that sound more in place in 90′s clubs. Sometimes it’s fun

But from a music standpoint, there’s few highlights. “Living in New York City” has a fun, optimistic beat, and follow-up “Love Can Grow Back” has a big horn section and a jazzy, soulful vibe. But those are rare highlights. The album starts off with two slow-burners that musically are, frankly, boring. And although they set the album’s largely remorseful tone, they also stumble out of the gate with 9 minutes of dull music.

So where does Robin Thicke stand? “Paula” is a love letter, a deep apology for the way he acted as a husband. For the most part, he’s earnest in what he’s singing. In some of the more enthusiastic songs, he sounds like his heart just isn’t in it. (Only exception: “Living in New York,” where he sings about how she’s moved to NY and how pretty all the women there are). Some lines throughout the album I caught are, “All that she needs is another try,” “If you ever need a friend, baby / I can be the one that you want” (vomit emoji) and “There’s something bad in me” (understatement!) His lyrics get pretty intricate, so it’s easy to give him the benefit of the doubt, he’s genuinely grieving and it’s possible he actually feels bad for the stuff he’s done.

But, don’t let that deceive you. Thicke is a singer, it’s what he does, but there’s no reason for this be as public as it is. Even if he believes his own lyrics, this album is a power play. I was watching a World Cup game on ABC the other day and I saw an ad for Thicke on Kimmel’s dumb show and the voiceover said, “Robin Thicke concludes his ABC takeover!” He’s riding a storm of buzz over this album, capitalizing on his own deep emotions. And it’s important not to look at Thicke as some kind of hero here. Everything that happened between him and Paula was his fault, and he’s starting to be made out as a victim. He isn’t. “Paula” is usually pretty creepy, with too many details about their relationship growing more abusive. He just falls short of singing her social security number and where she sleeps at night. It honestly sounds unintentional, a side effect of him baring his true emotions, but it’s weird nonetheless. “Paula” is, at it’s best, forgettable. It is, at it’s worst, gross and shady. It isn’t good. Don’t listen to it and don’t acknowledge it, you’ll just be feeding into the Robin Thicke machine.

(This review was originally posted at thefilteredlens.com, and since the time of publishing it has been released that “Paula” sold a whopping 530 copies in the UK. I wasn’t sure what the public’s perceptio of Thicke was nowadays, but it seems like we’re on the same page)

If you like this album, try: reading a different blog