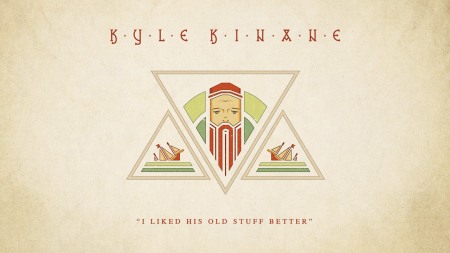 Comedy is tough on people that aren’t young. Kinane, at age 38, isn’t old, but you wouldn’t guess it. In his new special, he relates himself to the elderly via buying shelled nuts and fighting a battle against them. Kinane struggles with approaching middle age in a few segments, lamenting being “closer to the end than the beginning” and “tailgating your own funeral” at one point. One of the album’s best jokes lies in how Kinane finds himself reading signs out loud when he’s driving alone, imagining his brain is running diagnostics (“weird, bored Dad shit”). Jokes about burning his laundry and throwing change in the trash make Kinane uncomfortable with how his mind is seemingly rapidly degrading.

Age works in the other direction, too. Two of the album’s best bits are semi-repressed memories from his early 20’s – one, of a house party ruined by a confusing, out of place cop, and the other about the accidentally felonious blowjob he got behind a grocery store. Rarely do stand-up specials have themes that can run through the whole special, but Kinane manages to relate nearly every joke and story to the aging process. And the few bits that don’t, including saying “God bless you” to a cat and recounting his parents searching to find his interview in an issue of “Hustler,” land just as well.

What makes Kinane unique is his voice, both in the physical and metaphorical sense. Kinane has the gruff voice of a lumberjack who just slammed down a glass of whiskey (and he very well could be). Comedy Central hired Kinane to record their promos, he’s the voice you hear in their commercials (i.e. “Next Wednesday on an all new Broad City”). And his ‘voice’ is one that’s weirdly optimistic. Although much of this special is self-deprecating, Kinane always has the choice in his humor to do mean jokes, but almost never opts to. There’s an upbeat rhythm in his voice, that grabs the listener. Even if he’s talking about coroners hitting on women at a party or dropping a brick on a frog, he has an aura to him that makes it feel like things are going to be okay. I can’t say there are many comedians like that.

“”I Liked His Old Stuff Better”” is Kinane’s third special, and it follows in the trend of pointless track titles. His first two specials had bits that were named after songs by Cheap Trick and KISS, respectively. This special is all of the songs from “Straight Outta Compton,” preceded by “This Track is Not Called [track title].” It makes remembering bits for later a little difficult, but it doesn’t give away bits like other comedians would (my favorite comedy album, John Mulaney’s “New in Town,” has a bit titled “Asian American Woman” that gives away the big punchline).

“”I Liked His Old Stuff Better”” is an excellent comedy album, that proves Kinane is one of the funniest and most interesting people in comedy today. I’ve already listened to it a second time.

If you like this, try: Marc Maron. But since anyone familiar with Kinane obviously knows Maron, I’ll say Eugene Mirman’s “God is a Twelve Year Boy With Asperger’s.” I might say that because that’s the album I jumped to after listening to this last night, but the two comedians do share a voice that’s more welcoming than most other people in stand-up. 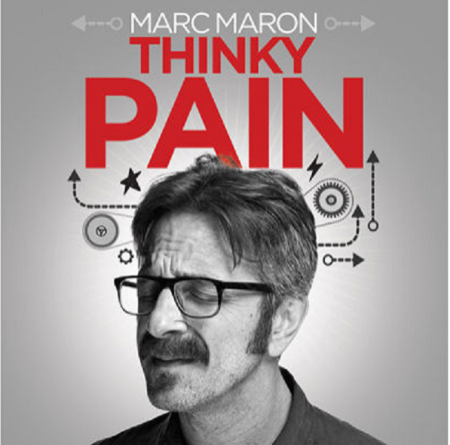 It’s very possible that nothing has ever sounded more ‘Maron’ than the beginning of his 2013 special “Thinky Pain,” now available on audio. He starts by wrapping up a podcast with Tom Scharpling and walking out on stage to tell a story about crazy Bill Hicks was, and then himself admitting he didn’t prepare anything for the night. Maron didn’t prepare any set or anything for the special – and it comes off in the most Maron way possible – 50% confidence, 50% apathy. He starts the Bill Hicks story with an oral history of the venue, killing time before figuring out where to start (like an “Odyssey” bard recounting a name). What follows is exactly what you’d expect from Maron – self-pity, unwarranted anger, and the thin line between insensitivity and offensiveness.

Most of “Thinky Pain” is personal stories. Maron recounts how missing a pop-out in baseball changed his life, and how he overcame hypochondria, and his trip to Israel with his Jewish wife, among many others. Since this special was unscripted, it reassures us that Maron really is the always-slightly-upset man behind the comedy. He even says at the beginning that he might end up not telling jokes but working through some things. Even though he does end up working through things, it’s riotously funny throughout.

Maron is usually at his funniest when he’s talking about himself, self-deprecating or not. He covers his Jewish upbringing and now-aversion to religion in “Born a Jew” and “I’m Not an Atheist” and how that translated a religious vacation with his wife in “Israel.” He talks about how the religious vacation was basically just looking at rubble of buildings that were and were not Jewish. He discusses his druggy past and how he doesn’t trust people who can’t let drugs take them over for a few years on “Drug Wisdom,” and he acts out what his first time trying out autoerotic asphyxiation would probably be like on “Autoerotic Asphyxiation.” Maron switches from angry to self-involved to reluctant on a dime, and occasionally comes off as a ranting man who just happens to be funny.

With his now very successful WTF podcast, and an IFC show in it’s second season, Maron picked a very good time to drop a new special. “Thinky Pain” helps Maron milk this opportunity without overworking it. And it establishes Maron as someone who is unfazed and unchanged by a surge in popularity. In fact, in five to ten years, we can probably look forward to a special about all of the pratfalls of success. The special’s title even comes from understanding the mental turmoil he’ll go through after missing that routine fly ball when he was a kid. Maron hasn’t changed a bit, and “Thinky Pain” is just as angry, whiny and honest as Maron’s ever been.

If you like this, try: It seems like such a softball pitch to compare a comedian to Louis CK, but Maron’s comedy has aligned with CK’s for years, even if the two have a rocky past together (or at least as documented on Louie). Maron is every bit as self-deprecating, angry, perverse and in control as CK.