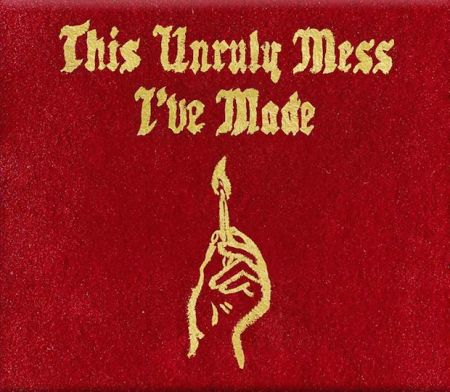 Man, a couple years ago I really hated Macklemore. I watched two straight dudes rip off Le1f, a struggling queer, black rapper, and win a bunch of Grammy’s for it and get lauded as LGBT icons. When Macklemore Instragrammed his Grammy saying Kendrick should’ve won, I didn’t believe his sincerity. But I will say he’s won me over into at least neutral ground. He was noticeably absent from the public eye after that Grammy’s ceremony, and in that time, he’s been evaluating his own stance as a sudden, important voice in a community normally reserved for black performers. His second collaborative album with Ryan Lewis sees him tossing and turning internally, struggling with his own white identity. Unfortunately, he throws us along for the process – and “This Unruly Mess I’ve Made” hits high highs and low lows.

Macklemore is at his strongest when he is serious, checking himself. The opening track “Light Tunnels” is also the best, with Macklemore directly addressing the media bias for both controversy and white performers. He namechecks the Britney and Madonna kiss, and mentions media egging Kanye on for controversy. He also raps about not preparing a speech for the Grammy’s, being unprepared to win. “St. Ides,” the mid-point and the only track without a guest, is an honest look into Macklemore’s history with addiction (which he has allegedly slipped back into). The album also finishes with three great, serious songs. “Bolo Tie” is further musings on his stance, with his best flow on the album, “The Train” is a more gentle song, with some great Spanish background vocals courtesy of Carla Morrison, and there’s second single “White Privilege II.” Reviews of the track have been mixed, understandably. It’s possible that Macklemore shouldn’t have related the song to his own career, or that he shouldn’t have made the song at all. I can believe all viewpoints. To me though (as a white person), it was a burning in him that had to come out. It’s radically different than the rest of the album, with soundclips and sudden breaks in sound and tone. He calls out white media, as well as Miley, Elvis, Iggy Azalea and himself for appropriating black culture. He also calls out people who say they don’t listen to rap except for him. It’s misguided at times, but there’s a brutal truth at the bottom of the song that needs to come from a very specific white person. I don’t know if Macklemore is that person, but so far he’s the best option.

“Mess” is at it’s worst when Macklemore takes a step back and makes jokey-rap, which unfortunately is about 75% of the album’s runtime. The great, ranting opener is followed immediately with lead single “Downtown.” While the song itself is fun, and Macklemore surprisingly fits right in with legends Grandmaster Caz, Grandmaster Melle Mel and Kool Moe Dee, it’s a dopey song that represents the total opposite end of the spectrum from “Light Tunnels.” There’s “Brad Pitt’s Cousin,” where he makes fun of his appearance, “Let’s Eat,” where he jokes about failing a diet, and “Buckshot,” where he insults Seattle’s music legacy. “Brad Pitt’s Cousin” has a Deez Nuts joke and a guest appearance from his cat. “Let’s Eat,” maybe the worst of the bunch, makes reference to Ben Affleck and Matt Damon. The lyrics almost throughout are just hokey and terrible, with lame pseudo-boasts and jokes that fall immediately flat.

Ryan Lewis doesn’t have as immediate of a presence on this album. “Can’t Stop Us” and “Thrift Shop” – beats decidedly unoriginal – had huge, bumping rhythms deadset on radio. There’s more of a subdued nature on this album, possibly coming from Macklemore using his personally elevated platform for discussions on his stance. “Downtown” swipes a great old-school beat, which works well. Elsewhere, there are surprising guest contributions. As mentioned, some legends pop up on “Downtown.” YG makes a surprise guest on “Bolo Tie,” Chance the Rapper shows up on “Need to Know,” and Leon Bridges owns a soulful outro to “Kevin.” Ed Sheeran also pops up on a cheesy ode to Macklemore’s daughter, “Growing Up.” Most surprisingly is a guest contribution from (really??) Idris Elba, who has enjoyed a small, private music career.

The album’s title, “This Unruly Mess I’ve Made,” comes from the opening track and refers to Macklemore’s accidental messing around with the state of race in rap. But it refers to the album as well, and I think they know this. There’s two distinct albums here, and they cannot blend at all. Serious songs bookend and occasionally permeate an album of otherwise goofy, cringeworthy songs. It’s obvious that Macklemore is weighing his own platform, and that he’s struggling with it. We’re forced to struggle with him, his music and direction changing on a dime. The result is an incredibly inconsistent and mismatched album that’s occasionally great, but often embarrassing. Macklemore is trying to find his exact voice. On “St. Ides,” he raps “We gon’ be alright,” just like Kendrick’s “Alright.” It is symbolic; one of the album’s best moments came from another rapper.