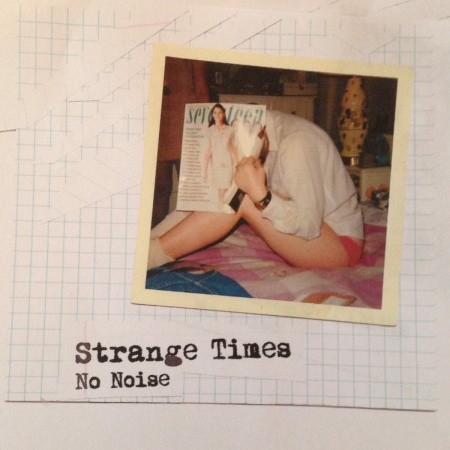 The best attribute of young rock bands is usually their youthful energy; No Noise is no different. Coming from (possibly a garage in) Montclair, New Jersey, the five-piece alt-rock band is marked by their 90’s influenced, energetic alt-fuzz.

“Strange Times” is led through battle by singer Mika, whose vocals dominate the EP. She rarely flourishes, instead letting her strong vocals fit within the music. She owns tracks like “Blisters” and “People Downstairs.” She complements the band behind her, with an energy that lifts them past similar, settled bands.

The five-piece, which also consists of Sam and Alec on guitar, Max on bass and Joe on drums, are younger than this reviewer – significantly younger. This bleeds through onto “Strange Times,” which benefits from a general aversion to metrics and structure. The band does conform to relatively standard rock structures, but they have a loose, almost practiced-sloppiness to them. Intentional or not, they’re reminiscent of early ’90’s acts like Built to Spill or ‘Blue Album’ Weezer in their rehearsed garage feel. Equal parts grunge and surfer, No Noise are able to tone it down, like on the bluesier “Play Dumb,” and are more than capable of kicking it back up, like on “People Downstairs.”

Lyrically, No Noise seem to be pretty straightforward, sticking more to a rock structure than the music might. And that’s alright, because they fit within the context of the songs, and the focus is stronger on the music and vocals anyways. And when it all comes together, it’s largely successful. “Strange Times” is an EP that demands replays, and it gets better with each spin. Their influences may lie in the greats, and they’re picking and mixing the best parts of each. No Noise have an open road ahead of them, and “Strange Times” is just a revving of the engines.

Stream the album on Spotify or on their Bandcamp page.

If you like this, try: Pavement, at their more guitar-heavy times.