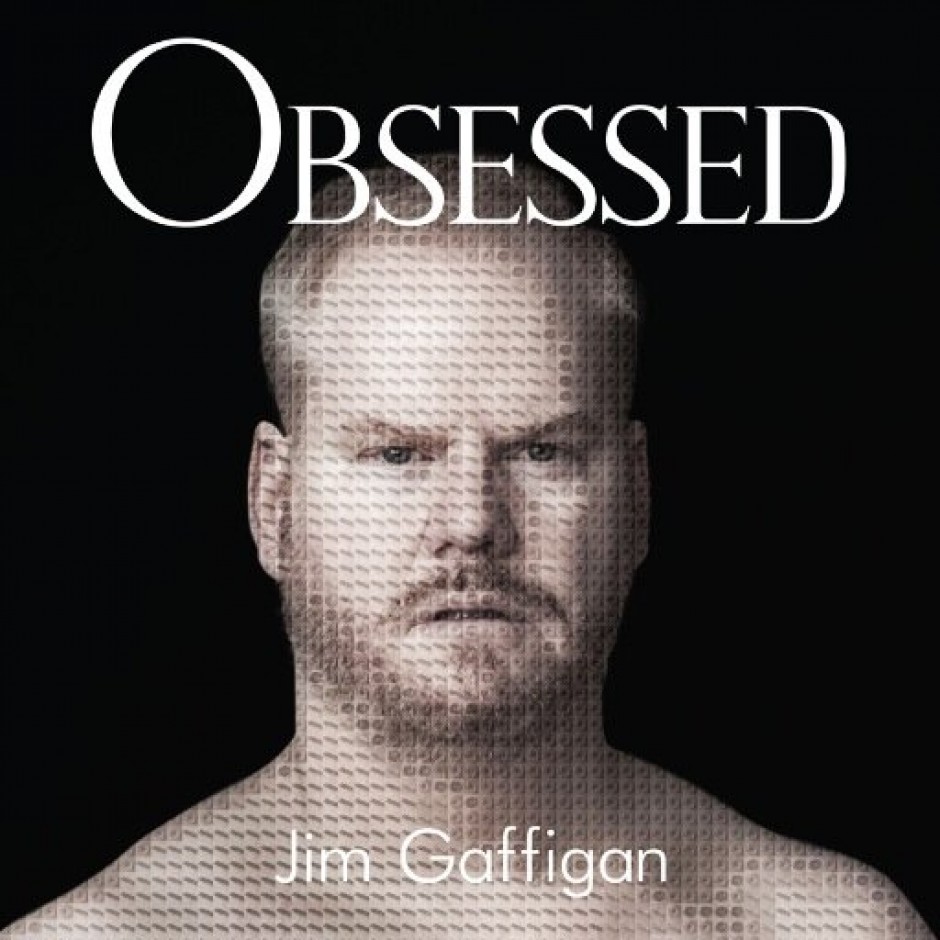 For stand-up comedians, if a formula isn’t yet broken, don’t change it. Jim Gaffigan continues to prove himself as a comedian who has found a unique voice, and one that can continue to drive it even though it seems like it should’ve overstayed it’s welcome. On what’s technically his ninth stand-up album, although only his fifth that’s readily available (the first four are out of print), Gaffigan continues to visit the same three topics he’s covered in the past – food, religion, and his kids. He honestly offers nothing new on “Obsessed,” instead choosing to enforce the album’s perfect title. “Obsessed” actually aims to cover the exact same ground that the near-perfect “Beyond the Pale” did in 2006. 2009’s “King Baby” suffered from being almost too safe, and 2012’s excellent “Mr. Universe” added a cynical vein, spawned on largely by long bits about his children. But “Obsessed” takes the exact same routes as “Beyond the Pale,” showing that as long as there’s food and weddings, Gaffigan’s material has yet to get stale. Unlike fortune cookies.

Nine of the album’s nineteen tracks have titles relating to food, with food bits often incorporated into other bits (like “Weddings,” where Gaffigan dreams of dying young from too much ice cream so he doesn’t have to go to his daughter’s wedding). And as always, they’re some of the best bits. “Obsessed” was recorded in Boston (my home city!), which feels very intentional for the album. Two of the strongest bits are centered around local New England cuisine, “Seafood” and “Donuts.” Just mere mentions of seafood and donuts elicit a response from the Boston crowd. The “Donuts” bit is all pretty predictable, with Gaffigan saying that still life paintings are of fruit because artists wouldn’t resist donuts long enough. And he doesn’t like seafood, not one bit. “‘I love lobster.’ ‘Look, I get it, I love butter too.'” Elsewhere, he tackles buffalo wings, Chinese desserts, Kobe beef and fried bread, among many others. The format is exactly as it has been on his previous food bits, and it’s largely predictable, but it’s still effortlessly entertaining.

On his non-food based bits, Gaffigan continues on with pieces on his kids, of which there’s five now. The jokes don’t land in the individual kids, but on having five kids as a collective. Now, people tell him just to stop before he forms a country (“Gaffganistan”) He briefly touches on religion again, too, with jokes on God sending Jesus back down to tell people they aren’t supposed to be eating crabs, and how people whisper the word ‘cancer’ because the Devil might give it to us if we say it loudly. His bit on “Cancer” is one of the album’s strongest points, too. He addresses both the disease – “Cancer wouldn’t even see me as a challenge” – and learning it’s his zodiac sign. “I killed grandma!” One aspect of Gaffigan’s comedic voice that goes unnoticed is how he can deliver slightly taboo bits on religion and cancer by starting with 45 minutes of totally clean jokes about food. It allows Gaffigan to talk about cancer in a totally inoffensive way, and keeps “Obsessed” spotlessly clean.

Gaffigan has largely done away with the “audience voice” gimmick that dominated much of “Beyond the Pale.” And that’s good, because it worked great there but it gets a little old even by the end of the special. He doesn’t even do many voices here, although twice he does what’s along the lines of a Jersey tough guy, that works surprisingly well. He’s more straight forward here, like he was on “Mr. Universe.” “Obsessed” might be Gaffigan finally perfecting his form, balancing food-based humor with hints of cynicism. He’s able to follow his formula exactly without sounding repetitive and without any dull points, and it’s another long special. “Beyond the Pale” is probably always going to be a high mark in Gaffigan’s career, but “Obsessed” comes pretty close to matching it.

If you like this, try: Gaffigan is a rarity in today’s world: a clean comic. So an obvious go-to is Brian Regan, another clean comic. Christopher Titus might be related, too, with his earlier albums being almost entirely family-based.