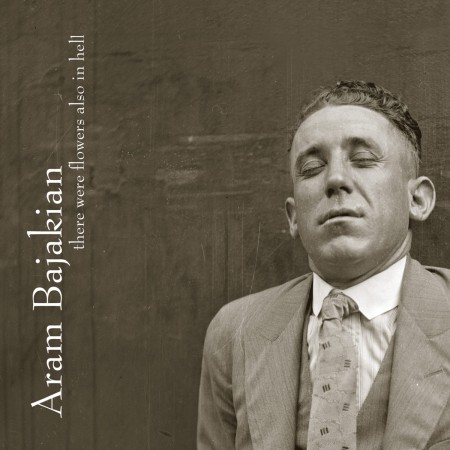 It’s almost easy to assume nowadays that a solo, instrumental guitarist will specialize in tender and light ballads that, while virtuosic, are usually pretty corny and repetitive. But that’s not what Aram Bajakian is about. Bajakian had been making a name for himself lately as the touring guitarist for the late Lou Reed. “there were flowers also in hell” proves that Bajakian is more than willing to step into fuzzy and noisy areas. The album opens up to a wide range of influences and emotions, often going for a more guttural response instead of a long-winded arc. There’s a lot going on, often switching flawlessly from fun rhythms to haunting melodies.

“Texas Cannonball” (an ode to Freddie King), and “Orbisonian” directly channel rockabilly bands of the past, with a hot guitar rhythm and uptempo bass and drums, provided by Shazhad Ismaily and Jerome Jennings, respectively. Bonus track “Cat Squirrel” is a lot of fun, too, as a lengthy jam. And “The Kids Don’t Want to Sleep” isn’t exactly a bundle of joy, but it’s noisy and has a pre-grunge remembrance to it.

But the album’s friendlier tracks are not the only standouts. “Requiem For 5 Pointz” sounds like a funeral, with a haunting echo and a slight clacking of what resemble bones. The song brings out a viscerally disturbing response, through what’s ultimately a quiet and simple guitar line. Likewise, “Medicaid Lullaby” has a perturbed feel to it, with an extra poetic sense. Elsewhere on the album, there’s ballads, rock songs, and songs on all sides of the emotional spectrum.

“flowers” is an instrumental album, but Bajakian doesn’t need any lyrics to tell his stories. Every one of the thirteen songs is distinctly different from the next. In fact, the only two that are similar are the two rockabilly throwbacks, and they’re both so fun that it doesn’t matter. He blends noise, rock, and jazz and many other elements without even really trying, or at least hiding it well if he is. Bajakian is a unique presence – enough of a solo presence to be expected at blues clubs, while enough of a amp-destroyer to be seen playing with noise-rock artists. “flowers” is a interesting listen for people of any genre, fans of instrumentals or not.

The album will be available on bandcamp on February 1st.